Design started in 1943, based on a pre-war T34 experimental development and resulted in the T44, which had many novel features. However, its big drawback was a small turret which precluded anything larger than an 85mm gun. With a new turret and a 100mm gun, the tank was accepted as the T54 in mid 1945.

Mechanically, the tank was very interesting. The engine was mounted transversally, and the Russians finally moved from the Christie suspension to a torsion bar system. The engine was a totally new diesel V12 delivering 520 bhp. The turret was a heavily curved, cast structure, reminiscent of the turret style of the IS heavy tank, and the armour significantly thicker than its T34 predecessor.

Whatever praise was heaped on the T34, probably even more should go on the T54/55 series.

From then the T54/55 (the T55 was essentially a much modified T54) has been continually upgraded in virtually all departments, proving the soundness of the initial design. Armour, armament, new fire control systems have all been introduced, with the result that the T55 became a sort of ‘budget’ MBT for armies short of cash. Latterly upgrade packages have even been offered by US manufacturers, such as Textron and General Dynamics.

In a similar way to the Centurion and the M60, the T55 soldiered on and still soldiers on around the world. It has seen extensive active service in the Middle East conflicts, Africa and Asia. It has spawned engineer derivatives also and looks set to continue into the future. 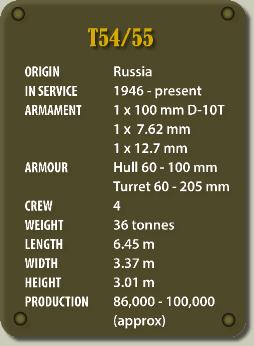