Post WW II, Sweden equipped its armoured forces with British Centurions, and when the time came to replace these in the 1950s, the natural first step was to see what else was on offer from other countries. However, at the same time a purely Swedish solution was pursued, for all the familiar reasons – economy, national pride etc.

Sweden's policy of neutrality meant that, if it ever had to contemplate a war, it would be one of defence against an aggressor. This allowed consideration of some form of turretless vehicle, which would be both cheaper and simpler to produce. Importantly it could also have a very low profile, aiding its deployment in ambushes. This was straightforward, but the Swedes went several stages further.

In the whole story of post-1945 tank development, the Stridsvagn 103 - or ‘S tank’ - deserves detailed examination. 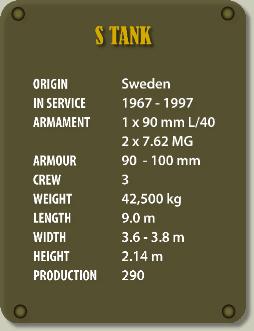 Even a turretless tank has inescapable issues of size, when the gun is permitted limited traverse and elevation. There has to be room inside for the breech to swing left or right and for it to move up and down without striking the roof of the hull. The designers chose a fixed mounting for the gun (a Bofors 105mm firing the same ammunition as the British L7), thus it could be mounted quite close to the roof of the fighting compartment. So when the tank was in a ‘hull down’ position the portion of the silhouette visible above ground level was very small indeed.

Fixing the gun like this gave the designers additional problems and opportunities. Firstly, it meant that a simple autoloader could be installed, and a crewmember dispensed with (the loader). This cut down the size needed and also enabled the gun to fire up to 15 rounds per minute – really useful in an ambush. The big problem remained of how to actually aim the gun at a specific target. The answer to this was to make the whole vehicle move in all planes. To achieve this it had a fully automated and adjustable suspension which was capable of elevating the whole vehicle, or one end, and a second engine to provide economical power for these and general low speed running. For high speed a small turbine was used: another pioneering move.

Dispensing with the turret and loader , and automating a lot of he controls meant that the tank could be handled by a crew of just two, although in reality a third member was carried to serve as radio operator and second driver. A further aid to its survivability was the provision of a second driving position facing aft with full controls, so that the tank could go backwards as fast as it could go forwards. Both the commander and driver had duplicate controls meaning either could control or fight the tank.

Interesting as the concept was, and despite the positive reception in tests in other countries, the S tank never saw active service and was never used outside Sweden. When it, too, came up for renewal, the Swedish Army reverted to earlier practice and opted for a derivative of a conventional turreted tank, the Leopard II from Germany.