Although the T34/76 was perfectly capable of going up against the German tanks seen during the first 18 months of the war in Russia, the appearance of the Panzer IV with the long 75mm gun and of the Tiger underlined the need for more powerful, mobile anti tank guns.

The SU 100’s main point of difference was its larger, 100mm D-10S gun; an adaptation of a naval gun. In addition, improvements were made to the internal layout and the armour. The new gun was capable of defeating all German tanks except the King Tiger. It could penetrate around 160mm of armour sloped at 30° at a range of 1,000 metres. In addition it could fire a significantly heavier high explosive shell, making it very useful in the infantry support role. Around 2,300 were produced by July 1945.

The capabilities of the SU 100 ensured that, with continuing improvements to the sighting and ammunition, it remained in service long after 1945. It was finally withdrawn from service in front line units in 1957. The SU100 was also sold in large numbers to other Warsaw Pact armies and Russian clients, notably in the Middle East, where they were still in action in 1973 during the Yom Kippur War. Even now, some are reported to be in service with the Vietnam People’s Army.

The starting point was the SU122, a self propelled assault howitzer built on the excellent chassis of the T34. The gun selected was the 85mm D-5T, which had started life, like the German 88mm, as an anti aircraft weapon. Similar to German practice this is built into a fixed, casemate mounting in a modified superstructure, with limited traverse. This was not to prove an insurmountable handicap in action as the Russian tactic was to use SUs from hidden positions after German armour had been either allowed to pass through the front line, or even lured there by standard T34s.

The first SUs entered service in August 1943, and around 2,000 had been produced before production was switched to a more powerful version, the SU 100 in late 1944. The arrival of the T34/85 rendered the SU85 redundant as it offered no edge over the new standard tank. 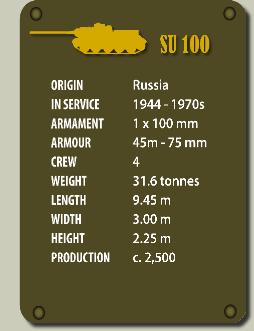