Faced in NATO with an essentially defensive role against a large volume of enemy armour, it is hardly surprising that the German Army revisited the concept of the Sturmgeschütz which had been so successful during World War II.

The Jagdpanzer used a chassis developed by Hanomag Henschel for an Armoured Personnel Carrier and mounted in it the 90mm gun formerly used in the M47 Medium Tank. Like other Tank Destroyers, the Jagdpanzer was meant to use its low silhouette and mobility rather than armour to survive against Russian Main Battle Tanks.

The first prototypes were built in 1960 and the vehicle entered service in 1966 with 770 being ultimately built, of which 80 went to Belgium. Parallel to the gun armed version, there were developments for a missile armed Jagdpanzer, reflecting the development trend in post-WW II anti tank weapons. With the inevitable development of main tank armour and armamaent , it was only a matter of time before the 90mm gun became obsolete. From the late 1970s all the Jagdpanzers were converted to missile versions. The last versions left service around 1990 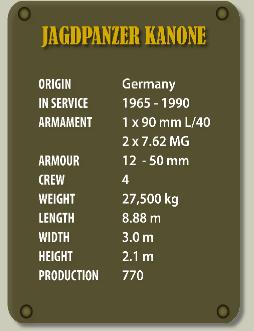