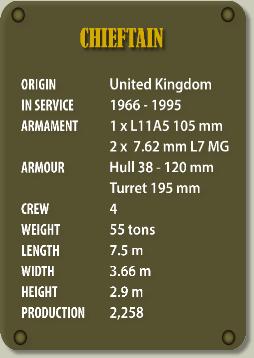 With the introduction of the Chieftain in 1966, the British Army for once had a tank which had the most powerful gun in the world and which was the best armoured.

The original design by Leyland was for a successor to both the Centurion and the Conqueror, capable of successfully fulfilling a variety of roles form tank combat to infantry support.

Its heavy frontal armour and versatile 120mm gun represented a real improvement, but Chieftain was continually let down by its engine. A NATO requirement at the time was for multi-fuel engines capable of running on almost anything combustible. Unfortunately the engines resulting from this tended to deliver less power than planned, which immediately affected performance.

In addition there were reliability problems leading to an unacceptable breakdown rate. Much work was done and the situation improved (as did the power outputs) but the tank inevitably increased in weight, making performance always an issue. The particular suspension also provided a somewhat uncomfortable cross country ride for the crew.

Continually improving fire control systems and sighting ensured that the Chieftain remained in service both in the UK and Middle East well into the 1990s. Iran was a major customer and used Chieftain during the Iran-Iraq war of the 1980s. Developments for the Iranian order saw the transition from Chieftain to Challenger with an interim model, the Khalid built for Jordan.

This was essentially a hybrid of the Chieftain and the Challenger I. In addition various other adaptations on the Chieftain chassis included engineer vehicles, anti aircraft units and mine clearers.