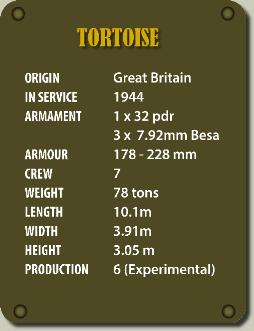 The Tortoise provided yet another example of how events can easily overtake a design. Born out of the WW II need for tanks which could assault very heavily fortified strongpoints, the specification which was to result in the Tortoise was issued in early 1943, in anticipation of the need to overcome German defences in any European invasion.

25 were ordered off the drawing board in February 1944 for delivery in September 1945. With the end of the European war in May 1945, this order was cut back to 6 vehicles for further evaluation.

The point instantly noticeable about the Tortoise is that it does not have a revolving turret, so it is - technically - not a tank but an assault gun.

The 32 pounder gun, developed from the 3.7” anti aircraft gun, was effective but had limited traverse. Its massive bulk and weight (around 80 tonnes) made it unwieldy in the field, and difficult to transport.

The prototypes were finally completed in 1947 and used for testing only. By then both the performance of the ‘standard’ tank – Centurion - and the change in the European political scenario meant that the conditions for which Tortoise was conceived no longer applied.

Tortoise followed in the conceptual line from the German Maus, through the Jagdtiger, and along with the US experimental T28, represented the final moment of ‘Super Heavy Tanks’.