Originally conceived as a Cruiser tank, according to the British classification of the time, work started on what would become the Centurion in 1943. By then the British had a suitable engine in the Rolls Royce Meteor (a de-rated Merlin aero engine) and a world class gun (the 17 pounder).

Probably because there was no dramatic time pressure then, care was taken in the initial design of the tank, with the first prototypes only being manufactured in January 1945. Six were rushed to Belgium for field trials, but only arrived just after the end of the European war in May 1945. With the end of the war, the pace of development eased a little and further work on armament and armour was undertaken before volume production was started. The 17 pounder gun was replaced by the larger 20 pounder and the secondary 20mm cannon was deleted.

Like those other great protagonists of the Cold War, the Soviet T54/55 and the US Patton series, the Centurion’s origins go right back into World War II.

The basic design of the tank was improved but little altered during its life. It had sloping front armour and an extended Comet suspension, but with a different system – Horstmann instead of Christie. The result gave a performance superior to the Comet and a hitting power (with the 17 pounder) at least equal and later superior to it. So good was its all-round performance that it called into question the old split between ‘infantry’ and ‘Cruiser’ tanks and was unofficially referred to as a ‘Universal’ tank - effectively the first Main battle Tank.

New Marks of the tank followed swiftly. Few Mark Is were completed before the Mark 2 arrived in December 1946. By 1948, this was supplanted by the Mark 3 with a gun stabilisation system for shooting on the move. Such was the basic soundness of the chassis design that the obsolete earlier Marks were not scrapped but converted into engineer and specialist vehicles; a process which continues to this day around the world, some 67 years after its introduction.

Around 4,400 Centurions were built. They saw active service around the world. Its first shots were fired in Korea, and from then on its record reads like a list of late 20th Century conflicts: India/Pakistan, Middle East, Africa, Vietnam and The First Gulf War. Today the Israeli and South African forces still use heavily modified variants of Centurion in troop-carrying or engineer roles. 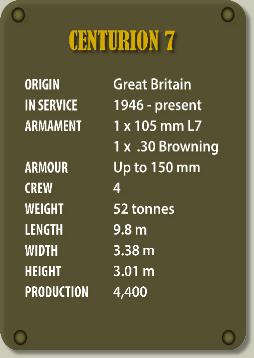