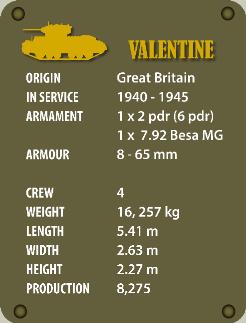 The British Valentine is interesting because it represented an early attempt to combine the virtues of the cruiser tank (lighter weight and greater agility) with those of the Infantry tank (high protection). It started life as a private initiative of Vickers Armstrong, with the tank being ordered off the drawing board in April 1939 and ultimately accounting for around a quarter of British tank production during the war.

Based on proven mechanical components and with a relatively low cost, the Valentine proved an immediate solution to the problem of re-equipping the British Army after the loss of most of its heavy weapons in France in 1940. Valentine entered service in July 1941, and immediately saw service in North Africa.

As unfortunately with many early war designs, the Valentine was hampered by the installation of unsatisfactory main armament – a two pounder gun. This was only barely able to take on German tanks, but also lacked a high explosive shell to use in infantry support. On top of this, the turret was very compact and initially only had a two man crew, meaning that the commander had to do the loader’s job as well. While this was remedied with a three man turret and later the 6 pounder gun, it was still a very tight fit.

On its side, however the Valentine was reliable and reasonably agile for what was essentially an infantry tank and it finished up serving throughout North Africa

Over 2000 were supplied to Russia where its simplicity and reliability were liked, although the puny gun was hopelessly outclassed by all German weapons.