The A34 Comet was the last in the line of British Cruiser tanks. After this, the only tanks would be ‘universal’, capable of fulfilling the two roles previously identified for Infantry and Cruiser tanks.

Comet grew out of the earlier Cromwell, which had excellent performance and reliability but which suffered the continuing problem of British tanks of the era, in that it was undergunned when up against contemporary German tanks. Attempts were made to rectify this with the development of a Cromwell variant armed with the 17 pounder anti tank gun, and called Challenger. This was not a success for a variety of reasons and production delays meant that few were available by the time of the Normandy invasion. 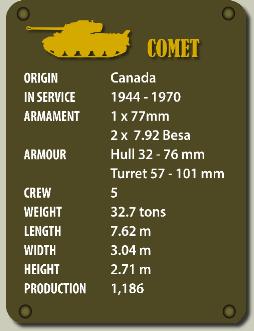 In parallel to the development of the Cromwell and the digesting of the experiences with Challenger, work started on a development of the 17 pounder with the aim of making it easier to install in the tanks available at the time. This resulted in a gun which, still the same calibre and firing the same shot, had a shorter barrel, lower muzzle velocity and a shorter shell case. To avoid confusion with the standard 17pounder /76.2mm ammunition, it was christened the 77mm.

In July 1943 the design for a tank mounting this gun on a strengthened Cromwell chassis was presented and sanctioned for urgent further development. The result promised to be a proven gun on a proven chassis, capable of more than holding its own against likely German opposition. The first prototype was delivered in February 1944, but production delays meant that the first production models were not delivered until September 1944.

The Ardennes offensive interrupted the conversion to the Comet and it was only in the latter months of the war that the Comet saw active service. Although too late for any major tank battles, it was greatly appreciated by its crews for its all round performance and reliability coupled to a gun which was hard-hitting, accurate and fired an effective high-explosive shell .

Post-war, Comet remained in service with the British Army until the late 1950s, serving again in Korea. It also served with the armies of South Africa and Finland where the last examples were only phased out in 1970.