Tank development had languished in the USA between the wars for similar reasons to those in Europe. The events of the late 1930s, culminating in the outbreak of the Second World War in 1939, forced the pace considerably.

US policy at the time was for tanks (i.e. cavalry) to be a support arm for the infantry with what were effectively weapons carriers, principally machine guns at that. This, plus the unrelenting pressure to come up with a cheap solution led to the first of the series, the M2. This was in production as the war in Europe started delivering its first lessons on the subject of tank effectiveness. These led to a rapid rethinking of the design of US tanks if not their role and affected all projects and vehicles then in the works. From this emerged, among others, the M3 Light Tank as a stop gap while longer term projects were planned..

Approved for production in July 1940, the M3 was even then questionable as far as armament and armour was concerned, it had excellent speed and mobility, thanks to use of proven suspension and mechanical components. It had a 37mm gun and several machine guns; a leftover from the infantry influence of the earlier decade. The seven cylinder, 250hp radial engine drove the 12.5 ton tank to a top speed of 36mph and the proven volute spring suspension gave a reasonably comfortable ride across rough ground.

Desperate for tanks after the losses in France in 1940, the British Army became major users of the M3 in North Africa where the ease of maintenance, mobility and reliability earned it the nickname of ‘Honey’. But its shortcomings soon became apparent. Its 37mm gun was inadequate against the arriving German Panzer IIIs and IVs. Its armour, too, was lacking against these opponents. It also had inherited a number of problems (in British eyes) from its American ancestry. The turret was designed for two man operation, whereas British practice was to have three men, with the commander free from other jobs. Also the turret did not have a basket, meaning that the crew had a tricky job when the turret rotated, having to step over the high transmission shaft from the engine.

Efforts were made to rectify the various shortcomings over the next couple of years of its life, with changes to hull and turret design, armour and internal layout, but the armament remained weak and the tank was soon relegated to reconnaissance missions, where its speed and agility were still needed. It was phased out of service with the arrival, first of the M5 (also confusingly called Stuart by the British, despite the fact that it was essentially a different vehicle) and finally the M24. 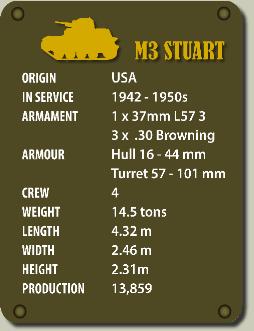