The three factors pursued by tank designers for ever are firepower, mobility and protection. For a long period these were frequently mutually exclusive. Well-protected tanks were slow; fast tanks poorly armoured. Add to that the persistent belief in some countries that tanks were not in the business of fighting other tanks, and the picture of tanks in the early WW II years becomes clearer. The T34 broke the mould.

Tank development in Russia in the 1930’s focused heavily on the Christie suspension system. By 1940 efforts were concentrated on the development of a fast medium tank, derived from various designs of the preceding years, which had culminated in the A20 of 1938 and the T32 of 1939. The hull of this tank prefigured the T34, with sloped armour, and (in the case of the T32) a 76.2mm gun. The first two prototypes of the T34 were revealed in December 1939 and immediately performed the unheard of task of doing the round trip from the plant in Kharkov to Moscow and back – around 1,800 miles – under their own power and without major problems. Production started in June 1940.

At the heart of the tank was its V12 diesel engine, result of an earlier decision that tanks should be fitted with diesel engines for improved economy and reliability. This modern engine – largely of alloy, not cast iron, with four valves per cylinder and an output of 500bhp (rising later to 600bhp)- gave the 28 ton tank a top speed of around 32mph.

The extent of the surprise on the German side when they first encountered the T34 in late 1941 cannot be overstated. It outclassed the Mark III and was the equal of the early Mark IVs. Prompting the German High Command to demand a quick response, possibly even in the form of a simple copy of the T34!

In the harsh light of combat experience, the T34 was fitted with a longer more powerful main gun and additional armour, but it became clear that more firepower was necessary to combat the Mark IVs with the longer barrelled 75mm gun and, lafter, the Panther and the Tiger. This was achieved by installing the 85mm gun in a new cast turret with now a three-man crew. It went into service in late 1943 and continued through the end of the war and beyond, remaining in service in some satellite armies through the 1960’s and seeing action in Korea and the Middle East.

The T34 has to be regarded as one of the most outstanding and effective tanks ever. Around 40,000 were built, often under horrendous circumstances (tanks from the Tractor factory in Stalingrad were driven, incomplete, off the production line and into battle). It was not perfect. The T34/76 had only a two man turret, meaning that the commander was constantly diverted from his main task to function as gunner. Build quality was often questionable and the T34/85 had an unfortunate shot-trap in the ‘waist’ around the turret. But, like the M4 Sherman in the West, it was available in large numbers and by the standards of the day, exceptionally reliable. Unlike the Sherman, it always had adequate armament and its speed and agility over rough ground was superior to just about anything else at the time. 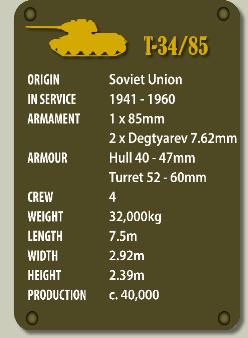