With the general reduction in defence spending after the end of The First World War, there was little government desire anywhere to experiment with new tank designs. However, private enterprise in the form of Vickers in the UK filled the gap, with a design which evolved from a Light Tank through to a series of Medium tanks. Although they never saw action, the Vickers Medium tanks were nonetheless very significant in the evolution of tank design and armoured warfare.

Thinly armoured and not that fast, the Medium series had many features which are now taken for granted, but which make it essentially the first modern tank. Perhaps most importantly, it had a three man turret. This meant that the commander could concentrate on commanding and did not have to split his time between being gunner or loader. This feature, now universal, was by no means generally adopted even by the outbreak of World War II.

For its time it had quite advanced suspension giving a much better ride for the crew across rough ground. It also had a fully rotating turret, armed with a 3 pounder (47mm) gun and initially more machine guns than the crew could handle.

The Medium Mark II remained in service until just before the start of World War II. The basic chassis proved itself to the extent that various derivatives beside the gun tank were developed. Close Support versions and command tanks with extra radios were but two.

It was with these tanks that the experiments in the organisation and make up of armoured formations were conducted in the 1930s, providing the basis for armoured tactics not only in the British Army, but also, with much refinement, in the Wehrmacht. 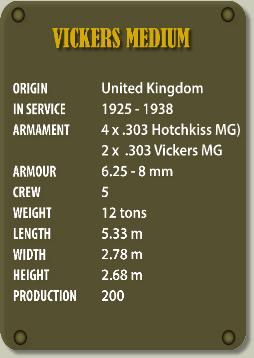