The AS 90 self propelled howitzer was conceived as a replacement for three guns used by the British Royal Artillery; the 105mm Abbott: the 155mm M109 and the towed 155mm FH70. It was a private venture by Vickers (a fairly regular occurrence in the history of British armoured vehicles) driven by a view that the joint SP70 project which failed in its aim to replace the M109.

In parallel to its creation and development, there has also been much work done on special Extended Range Munitions. One particular project would have seen the gun being upgraded to L/52 from L/39, using a round with a modular charge. This came to nothing after the charge failed to meet its specification and the project was cancelled. 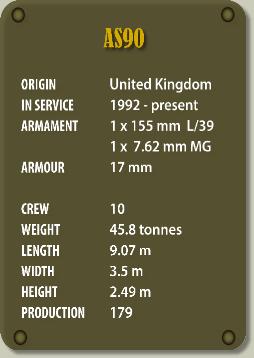 The AS90 has a fully automated fire control and gunlaying system, and can be operated fully closed down, providing protection for the crew. It is capable of firing 3 rounds in 10 seconds, and can maintain a rate of 2 rounds per minute as long as the ammunition holds out. It has a range of up to 25km. with a standard charge.

An interesting further development is happening in Poland where the upgraded turret with the 52 calibre gun has been fitted to a UPG chassis, resulting in the AHS Krab.