The very first appearance of British Tanks in September 1916 prompted the Germans to follow suit. First plans were presented in December of that year and a first prototype was ready for test at the end of April 1917. Production models were being delivered in October 1917, and the A7V first went into action in March 1918: a speed of development rivalling the British effort in the same area.

Built by Daimler Benz, the A7V followed the basic idea that tanks were really rolling strongpoints designed to be invulnerable to infantry fire while capable of destroying the oppositions strongpoints, such as machine gun nests. Although it had relatively thick armour (30mm at the front) this was not hardened armour plate, so although it was proof against small arms fire, anything larger would penetrate.

It was slightly shorter than the British Mark IV and somewhat heavier. Into this pacKage were crammed 17 crewmen, 6 machine guns and a 57mm gun! Unlike the British tanks, it resembled more the earlier French designs, being a large box sitting on top of its tracks, rather than a rhomboid shape with tracks running around the hull. So, larger and heavier than the British tanks, the A7V was similar in that it was underpowered, with twin Daimler Benz 100hp engines. Its off-road capability was hampered by a large front overhang.

First used in March 1918 during the Spring Offensive, the A7Vs made a relatively small contribution, but shortly thereafter, during the second battle of Villers-Bretonneux they came into action for the first time against enemy tanks – a group of British Mark IVs. Honours were about even in this fight, with damage and loss on both sides. However, the A7Vs had achieved a breakthrough much in the same way that their British opponents had done at Cambrai, but in the end the small numbers available meant that any success was always going to be localised.

It was recognised at the outset that the A7V was not destined for a long operational life and work was already under way on future replacements. These efforts came to a stop in November with the end of the war. Only about 20 examples were produced, and were far outnumbered by the captured British Mark IVs which the Germans refitted and re-used in their 1918 offensive. 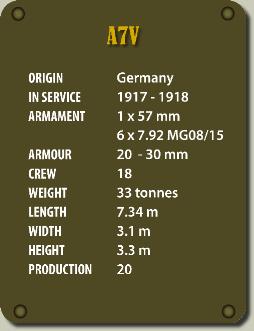